One of the great things about having a blog is that when I write an op-ed no one wants to publish, I can post it here! While I pay my writerly dues and amass a collection of rejection letters, I'm glad I can subject you, dear loyal readers, to what the masses will never see. I welcome questions, comments, recommendations to find a new field of study . . .

Here is the latest:

On Sept. 6, protestors took to the streets in Boston and more than 30 cities nationwide to demand the release and pardon of Bradley Manning, the 24-year-old Army intelligence analyst who faces possible life in prison for charges of releasing secret military information through the WikiLeaks website in 2010.


Outside the local Obama headquarters downtown, the Boston protestors carried signs and distributed handouts with the slogan “Blowing the whistle on war crimes is not a crime.”


As a former military public affairs officer, I agree with this slogan, and I agree with the principle of Manning’s actions—his intentions to, as the Bradley Manning Support Network website states, “inform the public and promote ‘discussion, debates, and reforms.’”


However, Manning’s methods were illegal, reckless and potentially dangerous, and for that he should be held accountable.


I‘m no stranger to the flow—or lack thereof—of government information. In fact, the strategic “spinning” of information, and my role as a spinner, in part drove me to leave the service. Now a civilian, I relish the freedom to speak candidly and to openly express my opinions.


But there are certain things I will never discuss, because such information could endanger my military comrades and hinder foreign relations. All veterans must bear the burden of selective silence.


Despite Manning’s obvious security breach, the Bradley Manning Support Network website stresses that “Not a single person has been harmed by the release of this information.” Though some officials are more wary, general consensus seems to assess the damage as minimal. For that, we are fortunate.


Some of the documents released on WikiLeaks dealt directly with my nation-building unit in Afghanistan. These items were classified for a reason; they addressed ongoing operations and investigations of insurgent activity. If this information had landed in the wrong hands—hands linked to the subjects of the operations and investigations—the U.S. personnel named in the documents could have faced serious danger.


Furthermore, classified communication can reveal military “tactics, techniques and procedures,” the exact processes for planning and executing operations. Enemy knowledge of these systems could easily jeopardize their effectiveness, and again, put those involved at risk.


Manning’s charge of “aiding the enemy” refers to his knowingly making such information available to the enemy by enabling its posting on the internet, a resource to which any audience has access.


These actions equate to treason. Treason is punishable by death. Intent is irrelevant.


Like Manning, during my time in the military I saw information that I felt belonged in the public domain. The American people deserve the opportunity to make informed decisions about a war they support with resources, sons and daughters. But a delicate balance exists between transparency and operational security. When tipped, this scale can compromise military and bureaucratic missions.


To assert that the military walks this line well would be brash. The military has a process for releasing information, but as in many dealings with the U.S. government, this process can be frustratingly long and painstaking, more difficult than it should be. Far too often, officials withhold information unnecessarily, even against regulations.


In these instances, we need people with courage like Bradley Manning. America entrusts our military with upholding the highest standards of conduct, with using resources wisely and supporting our collective best interests. The media and whistle-blowers serve to maintain accountability.


Still, one can blow a whistle without abusing sensitive information. Unfortunately, Manning did the right thing the wrong way.


The Free Bradley Manning campaign considers their subject a hero and a scapegoat. They express concern that Manning’s potential life in prison sentence and his treatment during pre-trial incarceration at Marine Base Quantico, which included extended solitary confinement, will serve to intimidate future whistle-blowers.


On the contrary, Manning must be an example of punishment befitting actions.


We cannot set the precedent that good intent justifies law-breaking, that lack of perceived damage negates the known potential for damage, and that there exists an acceptable level of treason.


I hope Manning’s actions do bring about international debate and reform. And I also hope his methods are penalized accordingly.
Posted by Lauren Kay Johnson at 11:02 PM 1 comment: 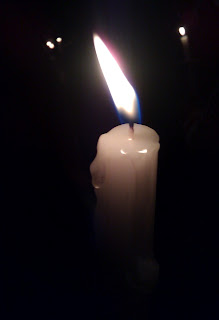 The candle warmed my face. It was a breezy night, one of the first that really felt like fall, and the flame danced and sputtered in front of me. Other candles came to life, bathing the gazebo an eerie glow. I thought how strange it was that this was the first Sept. 11 I’ve observed by lighting a candle.

I guess that’s how it’s done in the civilian world.

Each Sept. 11 on the Florida military base where I was stationed, life stopped for a moment. No one was too busy to pause and remember. But there, we had reminders every day—our camouflaged uniforms, the Rotator shipping out a new group on deployment, bringing a group home. The routine absence of family and friends. The memorial outside the chapel, the plaques in the air park, the streets bearing names of those who would never return.

When I was in Afghanistan, we held a remembrance ceremony on the helipad—the only space large enough for our formation—ducking from dust and gravel kicked up by the rotor blades of incoming helicopters. We didn’t have to work to remember there, either; each of our lives hovered in the aftermath. If we got too comfortable, there were 17 faces to bring us back, watching us from behind frames on the conference room wall, under a sign that read "Fallen Comrades of Paktya Province."

Out here in the real world, reminders are scarce.

Even I often get distracted. I stress about schoolwork and my new internship and the cat hair that clumps in the corners of my living room. Then I see a news report on Afghanistan. Or another name. Or something unexpected that brings me back to camouflage and dusty helipads and faces on a conference room wall.

Today, flags flew at half mast, and the TVs at my gym streamed footage from 11 years ago. But traffic swirled around our little vigil, students chatted and laughed on their way to class, the metallic bing! of bat-on-ball rung out from a baseball game across the park.

There weren’t enough candles to fill the star etched into the gazebo floor. I wished there were. With two empty tips, it looked like a feeble effort; a tribute made and then hastily forgotten. 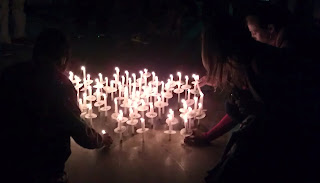 I knelt at one edge and tipped my candle, letting a drop of wax stain the concrete. I set the base of the candle on the drop and held it until wax merged with wax and it stood upright on its own. The crowd thinned. The moment had passed.

Adjusting the shoulder strap of my knapsack, I walked down the gazebo steps, back into the real world. I turned once before leaving.

My candle was lost in the collective glow, a small marker of light, of stillness on a busy city night.

Posted by Lauren Kay Johnson at 10:25 PM No comments: