This is a bit of a departure from my usual blog content, but bear with me, it is military related. It’s a story of the loneliness and isolation that can accompany military life, and the adaptability necessary for (or bread from) military transience. It’s a story of comfort and compassion. It’s a story of a cat. And in honor of Valentine’s Day, it is, above all else, a love story.

(WARNING: The following may be sentimental or even downright mushy. But that’s okay, because it’s Valentine’s Day).

I got Annabelle in April 2007. Six months earlier I had moved across the country—literally as far as one can move in the continental U.S., from Seattle to Florida—to begin my Air Force career. I’d left home before, but it was a temporary arrangement, to a series of college dorms. This was my first time really truly on my own.

I dove into my new job, moved into my first grownup apartment, and adjusted way too easily to the Gulf Coast bar scene. But socially, I struggled. Everyone I knew was two time zones away. In an environment where relationships are rank-dependent, I was one of two young officers in my office and the only unmarried one. Without the social Velcro of a classroom or work setting, I was clueless on how to make friends.

So I did what any single, lonely girl would do: I adopted three cats.

Okay, that’s not really how it played out. I’d grown up with cats, loved them dearly, and planned to get one of my own once I was settled in in Florida. But fate had other plans. The day I called my apartment manager to ask about a pet deposit, he found a beautiful long-haired black cat and her four newborn kittens on his property. A few weeks later, when the kittens were weaned, I carried mama and two babies across the courtyard to my apartment. Annabelle, Gracie and Milo Johnson. We were a happy little family.

Eventually I did make friends (among whom I was the center of many good-natured Cat Lady jokes, which I thought afforded me a level of social prestige—I’d always wanted a cool nickname!). But we were all busy with stressful jobs and steep learning curves, and as with all nascent adult friendships, my connections lacked the shared history to make me comfortable enough to really open up. To cry. To scream. To cry and scream while eating ice cream for dinner in front of Sex the City reruns. To wonder what the heck I was doing with my life and why did I keep screwing up and when would I get a boyfriend already.

My cats didn’t say much, but they were good listeners. Especially Annabelle. While Milo and Gracie entertained me with their spastic kittenly antics, Annabelle comforted me. She was my lap cat. She greeted me at the door as soon as I got home. She slept on my bed every night. If I had visitors, Milo and Gracie hid. Annabelle went to the first available lap.

Military life can obviously be hard on people: the long and unpredictable hours, frequent moves, TDYs and deployments. We don’t often think of the toll these things must take on military pets. Less than two months after I got my cats, I was sent out of state for a six-week training session. The cats stayed with a gracious colleague (thanks Amy!).

During other, shorter trips, a series of friends rotated through cat care duty.

For base exercises, emergencies and special events, I volunteered for night and weekend shifts because I didn’t have a family at home.

When it came time to deploy, I moved out of my house and left my cats in the care of my parents . . . on the other side of the country. My parents flew to Florida to help me pack, then flew a terrified, yowling Milo and a silent, cowering Gracie back to Seattle as carryons. The airline had a two pet per flight rule, so Annabelle made the trip alone in cargo. (Her mellow demeanor made her the obvious choice—proof that no good goes unpunished).

My nine months in Afghanistan probably would have been much more pleasant with a cat. As it was, I settled for a stuffed one. My sister had given it to me before I adopted my real cats, and it just happened to look like Annabelle. The likeness slept with me on my hard Afghanistan mattress.

Back in Seattle, my mom worried about me like mothers do, and pampered my cats, fattening them up like grandmothers do. She adored them all, but said Annabelle gave her the most comfort. Annabelle sat in her lap, greeted her at the door, slept on her bed. 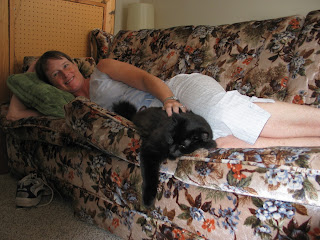 When I returned from my deployment, “home” was a fuzzy notion. In Florida, most of my friends had moved to other bases or were themselves deployed. My belongings were still in storage, my cats still in Seattle. I had eight months left in my military commitment, the definition of transient. Not wanting to sign a year-long lease, I bounced from spare bedroom to corporate apartment to housesitting; I took odd jobs and short term assignments at work so as not to upset the balance of operations without me.

A few months after my homecoming, my grandfather passed away after his own war: with cancer. I made it to Seattle to say goodbye and attend the memorial service. When I left I authorized the loan of “The Therapy Cat” to keep Grandma company. Annabelle took a trip to Tacoma, breaking in a new lap and getting hopelessly addicted to cat treats.

I completed my Air Force commitment just before Christmas and moved back to Seattle. I was luckier than most recently separated veterans: I had time to decompress before jumping into the next chapter of my life, and a safe, supportive place to heal. I kept to myself much of the time, holed up in my room writing about war, reading about war, thinking about war. Annabelle kept an eye on me from my childhood bed.

The following fall, I moved across the country again—not quite as far, just to Boston this time. I was excited for graduate school but hated the thought of starting over again, friendless and catless.

The transition wasn’t as difficult as I’d feared. Maybe because I’d done it before. Maybe because I found myself in classrooms with wonderfully welcoming and supportive peers. Maybe because I had a plan to bring my cats along as soon as possible. Probably because Boston has a lot of really good beer.

Whatever the reason, by the end of my first year, I was feeling happy and almost whole again. Almost. Taking advantage of the glory that is student vacation time, I flew to Seattle for a few weeks, then returned, cats in tow. Again hampered by the two pet per flight rule, and again trusting Annabelle to best handle the stress of separation, Milo and Gracie came first.

The cats brought a sense of life, comfort and coziness that had been missing from my condo. (It sounds so cheesy, but anyone who’s ever had a pet can understand). They’re just so stinking adorable and endearing.

I felt bad separating Annabelle and her babies.


They were family; they groomed each other and cuddled up together, legs and fur entwined so that it was hard to tell which cat ended where.

I missed her too, of course. And I didn’t know it yet, but I needed her in Seattle.

She was waiting for me when I flew home unexpectedly last fall, devastated with a broken heart. Once more, I holed up in my old room. Once more, she watched over me.

Finally, a month ago, we were all reunited. Annabelle tolerated the cross-country flight better than I did, and within 48 hours claimed her territory sprawled out on her back in the middle of the condo hallway.

On her first night, she peed in the bathtub. Like directly over the drain. Whether or not you’re a cat person, that’s impressive! 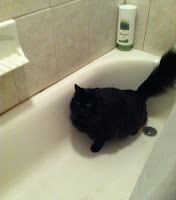 It took a few days, but Milo and Gracie decided they were glad to have Annabelle back too. The Johnson family was whole again.

The vet said it was probably a heart condition, a common cause of sudden death in cats. But I like to think of her as a fuzzy black four-legged guardian angel. She came to me when I needed her and helped me through some of the most difficult times in my life—and did the same for my mom and grandma. She saw all of us over the holidays, checking in in turn, making sure we were okay. In Boston, she could tell I was okay; happy, healing, settled, in good hands. And she saw that her babies were okay.

Then she decided she could go.

RIP to a remarkable cat