Friends, if you read one post here ever, please let it be this: The veteran community needs your help. Today the Clay Hunt Suicide Prevention for America's Veterans (SAV) Act, which supports much-needed (and much-belated) mental health care access improvements for vets, stymied by Sen. Tom Coburn (R-Okla.), who placed a Parliamentary hold on the act. His rationale? It's too expensive.

My husband did the math: The $22 million bill breaks down to less than $2,739.79 per vet who commits suicide each year. Not to mention the thousands of others who are suffering for unnecessarily long to unnecessary degrees because they can't get access to the care they need--and the care they EARNED.

Care for which Senator Coburn allegedly advocates. The following quotes are his:

That $2,739.79 per veteran suicide equates to roughly 1.57% of Senator Coburn's annual salary. Must we argue who in that equation has given more to his country?

Are you outraged by this hypocrisy? Do you support this nation's veterans? Well now you have an opportunity to DO SOMETHING ABOUT IT.

Share this info. Call until we jam the OK phone lines. Call until every angry American voice joins into a chorus on repeat in the senator's head. He's retiring in January, surely to a nice cushy life. Don't let his last act be to stop this critically important piece of legislation. Don't let him go quietly. DON'T LET THIS BILL DIE.

According to the Iraq and Afghanistan Veterans of America, who championed the bill, "The Senate is expected to end its current legislative session by Friday. If the bill does not receive a vote in the Senate before adjournment, it dies, and vets will be left to begin the entire process again -- if possible -- in the next Congress.

"The bill we are talking about is projected to cost about $22 million dollars. That's a lot of money to me. It's a lot of money to you. But in the context of the value of a human life, it is insignificant." Selke noted that 22 veterans, on average, die by suicide every day. "There are some things in this bill that might have saved Clay's life, and that might have saved some other veterans' lives" if the resources found in the Clay Hunt SAV Act would have been available. 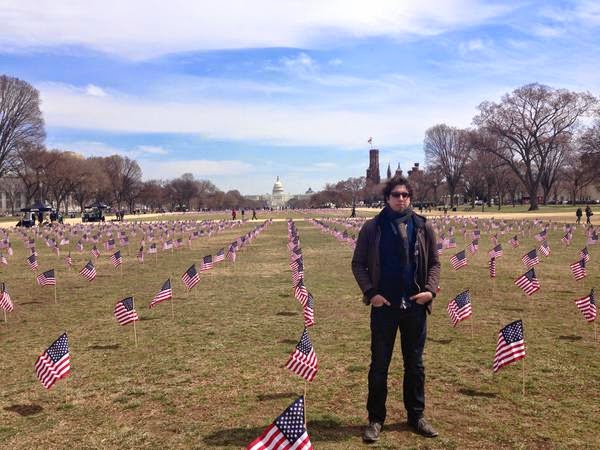 Thank you for your time, and your voices.

PHOTO: My husband, Colin Halloran, standing amid a display of flags on the National Mall--one flag for each veteran suicide this year. Far too many.
Posted by Lauren Kay Johnson at 10:05 PM No comments:

#GivingTuesday (yes, it's a thing!)

Happy Giving Tuesday! Apparently that's a thing. (A good thing, obviously, I just feel very old and uninformed not knowing about it until now.) If you, like many, plan to supplement your holiday consumerism with some good old fashioned charitable contributions, let me point out a few military/veteran-focused nonprofit organizations worthy of your consideration:

The largest organization for Post-9/11 veterans and their supporters, with membership topping 250,000, IAVA also boasts a stellar 5-star (93.32/100) rating from Charity Navigator. Unlike many veteran organizations, IAVA doesn’t charge membership dues; their funding comes through fundraisers and donors. They’re a community for veterans to connect, hosting “Vet Togethers,” parades and other events across the country, but much of IAVA’s impact comes from legislative initiatives. Every year they “storm the hill” to bring veterans’ concerns straight to congress. They were the driving force behind the Post-9/11 GI Bill and other game-changing enterprises. Currently, IAVA is pushing to enhance veteran mental health care and end the suicide epidemic, lobbying for Clay Hunt Suicide Prevention for American Veterans Act. **You can help FOR FREE, by signing the petition here.

I wrote a post about Got Your 6 two years ago when they first got started, and I'm excited to see how they've grown! “Got your six” is a military term meaning “I’ve got your back.” This organization has our backs with an unlikely ally: Hollywood. You may have seen their star-studded public service announcements, like this one:

…or noticed their snazzy “6” pins on the lapels of your favorite entertainers (which would make great stocking stuffers...hint, hint!). Got Your 6 is working to bridge the civilian-military divide by changing the conversation about veterans and shifting perception from “victims” or “charity” or even “heroes” to empowerment and potential. Like it or not, the entertainment industry has a lot to do with that. Portrayal of veteran characters on TV and in movies, in songs and literature, works into our collective psyches. (Got Your 6 recently published a fascinating—and disturbing—study on the topic, which you can read here.) In addition to PSAs and swag, Got Your 6 partners with 30 leading veteran non-profit orgs supporting their “six key pillars of veteran reintegration”: Jobs, Education, Health, Housing, Family and Leadership.

Team Rubicon epitomizes the idea of veterans continuing to serve. Trained and organized with military proficiency, their primary mission is as first responders following natural disasters, deploying to ground zero to provide immediate relief before conventional aid arrives. Efforts have ranged from small community service projects, to clean-up after Midwest tornadoes, to sending teams on humanitarian missions to Haiti and the Philippines.

More than just providing services to others, Team Rubicon also supports veterans with, from their website: “three things they lose after leaving the military: a purpose, gained through disaster relief; community, built by serving with others; and self-worth, from recognizing the impact one individual can make.” I have several friends (veterans and non-vets) who are active in Team Rubicon, and I’ve seen how the program has enhanced their lives. If my word isn’t enough to convince you, Starbucks CEO Howard Schultz wrote highlighted Team Rubicon in his new book: For Love of Country: What Our Veterans Can Teach Us About Citizenship, Heroism, and Sacrifice.

PHOTO from teamrubiconusa.org: Team Rubicon members in action in the Philippines in response to Typhoon Haiyan. Focusing on the hard-hit city of Tacloban and the surrounding towns, TR treated over 2,100 patients with immediate medical care.

A cause close to my heart is using writing or art to work through trauma and intellectualize military experiences, and to share those experiences with others. What better way to create an engaged, informed and supportive community? Along those lines, I recommend the Veterans Writing Project, Words After War, Warrior Writers, Military Experience & the Arts, and the Veteran Artist Program. The missions are similar, but programs, mediums, teaching methods and operating locations vary. Donate and/or check out their artistic projects (more stocking stuffers!).

There are many more worthy military charities, as general or niche as you want, as diverse as veterans themselves. For other areas, Military.com offers a comprehensive list, as does Charity Navigator.