Yesterday was farthest I’ve run since my knee injury three years ago.

To say it felt good would be an understatement . . . and a lie.

Of course it felt good! I conquered a milestone! I was also supporting a good cause: the 8th Annual Pat’s Run in support of the Pat Tillman Foundation, which provides scholarships to veterans and military spouses.

The run also felt like crap. It was hot outside, and though my knee was surprisingly pain-free, the rest of my body protested the entire 4.2 miles. 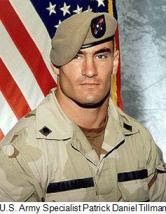 I know what you’re thinking (other than that I’m a total stud): Why 4.2 miles? The 4.2 mile course is in honor of Pat Tillman, #42 when he played football for Arizona State, who walked away from a lucrative NFL contract to become an Army Ranger after 9/11. His patriotism inspired a nation. In 2004, his friendly fire death in Afghanistan shocked a nation.

Every year, to remember the man behind the media storm, Pat’s Run is held in Tempe, AZ, finishing at the 42 yard line of the ASU Sun Devils Stadium. The race draws more than 30,000 people annually and has spawned 25 “shadow runs” across the country, including here in Boston, where yesterday nearly 100 participants – veterans, ASU alumni and supporters – came together. To remember.

I used to run to forget.

In a lot of ways, running still feels good – mentally, if not physically. But when I run now, I can’t help remembering how it used to be. My easy stride, my breath flowing deep and natural. So powerful. Now my legs and my lungs strain with every step.

When I run, I remember dawn in Indiana during pre-deployment training: the scatter of loose gravel as my unit started our morning run, the swish-swish-swish of my Air Force warm-up pants, and the first stabbing pain in my knee. I didn’t wonder how I would make it through a nine-month deployment with an injury. I wondered how I would make it through nine months without running.

I remember falling into a jagged rhythm on the loose, sticky belt of the treadmill in our Forward Operating Base’s gym. Staring into the white tent wall dripping with condensation, my iPod transported me back to the beach in Florida, or to the 1990s, or any time or any place that wasn’t a rickety treadmill in Afghanistan where my knee wouldn’t let me run any further.

Yesterday, after about a mile, I didn’t want to run further. But then I remembered that I could – it was a beautiful day in AMERICA and my body was working, at least for the moment. And I remembered those who could no longer enjoy beautiful days in America:

So I kept running, for them.

But watching the line of red t-shirts – #42 on the back – snake along the Charles River; knowing I was part of something bigger than myself, I felt powerful again.
Posted by Lauren Kay Johnson at 2:25 PM 1 comment:

The sound of silence

First, an apology. I’ve been terribly out of touch. It’s not just you; it’s everything. I guess that’s what happens when you’re falling in love . . .

I’ve had a bit of an epiphany in the last couple weeks. It has to do with my last entry. And it has to do with the object of my love-falling, who you may know through blog post infamy. Since I’ll probably be referencing him frequently now, I’ll just go ahead and call him Colin. Because that’s his name.

Anyway, what I’ve realized is I like to talk. I know what you’re thinking: Lauren is loud and obnoxious and always has been! This is true. Or it was . . . until Afghanistan.

Before Afghanistan, I was a pretty gregarious, bubbly person. Probably annoyingly so. I told my parents everything. I told random strangers more than they cared to know about the Air Force. I also wrote about everything – it was my way of chronicling my thoughts and feelings, and, if I was stressed, of shaping my stressors into something tangible, something manageable.

At some point during my deployment, I stopped talking. Not entirely, of course; I don’t think I’m physically equipped to do that. I stopped talking about my feelings. As I got disillusioned and worn down, as my feelings turned more negative, I withheld them because I didn’t want to worry my family back home. On the extreme end of the spectrum – the end you’re often on in war – if I were killed, I didn’t want them to think that I didn’t believe in what I was fighting for.

For similar reasons, I stopped writing. I had been keeping a blog, and I could no longer find non-worry-inducing “spins” for my entries. I ran out of ideas. I ran out of steam.

I ran out of words.

It took me almost a year to find them again. It started with my initial visit to the Mental Health Clinic at my home base, Hurlburt Field, FL. Social workers have a way of getting you to talk, and mine started picking away at my silent veneer. One I began to open up to her, I was able to ease into talking to my parents. I called them once and prayed they weren’t home so I wouldn’t have to tell them that I was hurting. They didn’t answer. I was relieved. I cried myself to sleep. Alone.

The next day, I finally told them. The ball started rolling. Hesitantly, I let it roll to other relatives and friends.

Graduate school applications – a writing portfolio – forced me to find my written words again. They came slowly at first, then stumbling over one another, eager to break out of the dark places they’d been forced to hide.

I've come to talk with you again

When I got to grad school, I was faced with a new hurdle: talking to strangers. And not just any strangers: civilians. I would have kept my mouth shut and my pen capped if I had a choice. But I’d already chosen nonfiction writing. (Awfully silly for someone who doesn’t want to talk about feelings).

I will be eternally grateful for the amazing reception from my classmates and teachers at Emerson. If their response had been different, I might have shut down again. Who knows where I would be now. Silent.

But they were interested in my words. They were appreciative. They were supportive. They wanted to hear more. So I kept talking, kept writing. I started another blog. I got more positive feedback, and it was like oil in my rusty machine.

Because a vision softly creeping

Then I went to Chicago for a writing conference, and met other veterans, including Colin, who like to talk. I was inspired by their openness; I realized I’m part of a veteran writing community that’s gaining traction and getting louder. I added my voice. And my machine got a new engine.

That engine propelled me through my last two blog posts about the March 11 Afghanistan Massacre. The incident hit me with a bombardment of complicated emotions, and instead of burying them, I talked. I wrote.

And I realized that talking is important.

Left its seeds while I was sleeping

After my initial massacre post, I got my first ever angry comment. I’m strangely proud of that – I’m officially a controversial writer! I’m so thrilled to have the opportunity to be controversial, to go against the “party line,” to exercise my First Amendment rights. I think that just might be my favorite amendment.

In a way, every writer aspires to be provocative, to incite thought, conversation, even criticism. To promote understanding. To present a new perspective. Speaking from within a community comprised of less than 1% of the American population (I’m talking about veterans, not Wall Street), these aspects are even more important. As Colin often says, in order for civilians to understand veterans’ experiences, veterans need to start talking. It’s easy to blame civilians for being “ignorant,” but the only cure for ignorance is education, and education can only come from the educated.

Like it or not, it all starts with veterans.

And the vision that was planted in my brain

After my last post, one person told me that this was the first time I’d really dug below the surface without skirting around the issues. I wasn’t conscious of that at the time, but looking back, I agree. Skirting is much more comfortable. And frankly, I’m trained to skirt. In public affairs, I learned how to tap dance around controversial topics, to answer questions in that artful roundabout way that sounds good but doesn’t actually answer anything at all. And like all military members, I learned to, in many situations, keep my mouth shut.

Now, it’s a constant struggle to keep it open. Still – after more than a year in the “civilian world” – I have to continually remind myself that I don’t need to censor my words. When you’re living in a restricted world, you don’t realize how easy it is to internalize the restrictions. (When you’re outside a restricted world, you don’t realize how beautiful your freedom is.)

In response to the post, fellow veterans told me about some of their own demons, of their manifestations of the demons I mentioned. They told me about their struggles readjusting to life and their families after deployments. Some have spoken with therapists. Some are reluctant. One called my blog a form of therapy.

There is no more powerful motivation than the thought that my words can reach into dark places within others and help light a spark of healing and understanding.

People called me courageous for being willing to talk, to be controversial. I don’t feel courageous. I feel like I’m doing what I need to do. I have been blessed (cursed?) with a passion – and, I like to hope, a talent – that spurs me to action. It makes me talk. Then talking feels good, and I can’t shut up.

Within the sound of silence

Beware: Before long, I may start screaming.

Because that’s who I am, and that’s what I do. I’m a talker. I’m a writer. I’m a breaker-of-silence. And that’s kind of cool, because the silence needs to be broken.

I just hope people are ready to listen.


“The state of birth, suffering, love, and death are extreme states—extreme, universal, and inescapable. We all know this, but we would rather not know it. The artist is present to correct the delusions to which we fall prey in our attempts to avoid this knowledge.

It is for this reason that all societies have battled with the incorrigible disturber of the peace—the artist.”


Interspersed lyrics from “The Sound of Silence” by Simon & Garfunkel
Posted by Lauren Kay Johnson at 5:09 PM No comments: