The limits of “therapy”: Some writing on not writing

I left the Air Force, I moved across the country, I enrolled in grad school, I started a blog to write about war. But I never said writing about war was easy.

I said it was therapeutic. And it was. Until it wasn’t.

I can’t pinpoint exactly when that shift occurred – I think it’s been shifting for a while – but it manifested itself in a very unattractive emotional breakdown last week. In the midst of my crying/nose blowing/self-pitying incoherent sob-infused mumbling, I had an epiphany: writing about painful experiences is painful.

Okay, that wasn’t really an epiphany… it’s pretty self-explanatory: Writing a personal account of a traumatic event means reliving, re-engaging, re-imagining said event. Of course it sucks! But writing also means processing, intellectualizing, making peace with the event, essentially ripping off the Band-Aid and exposing the raw wound so it can be treated properly. So you can heal.

Writing is proven effective in promoting healing after trauma – proven through my personal experiences and through legitimate scientific and psychological research. Cognitive Processing Therapy, one of the main methods currently being used to treat PTSD in military veterans uses writing as a key component; it’s a direct antidote to the PTSD tendency of “avoiding people or experiences that remind you of an event.” (My boyfriend, Colin, chronicles his personal experiences with Cognitive Processing Therapy in a blog series for Copaiba.org)

What I realized, though, as I writhed on the floor of my boyfriend’s car (seriously), is that there’s a limit to how much healing can take place within the delicate balance of reimagining and intellectualizing. Too much of the former too soon following the event, or within too short of a timeframe, and the brain can’t progress to the latter.

Looking back, I think I tipped the scale during my final assignment last semester. I wrote a piece about my first experience with death in the military; a friend was killed when the aircraft he was piloting crashed in Afghanistan. Understandably, it was a hard piece to write. But the event had been gnawing at me . . . I knew I had to process it, and writing was the best way I knew how. It was painful, but I had a deadline, so I gutted it out, vomited everything up on paper. As happens with vomit, the result was a bit messy.

Armed with feedback from my class, a few weeks ago, I set out to clean up the mess. But I couldn’t. Literally. Not only could I not write any more about the event, I couldn’t even think about writing without feeling physically ill. When I wasn’t feeling ill, I was feeling terrified because I was reminded of the last time my psyche forced me to stop writing – In Afghanistan, when I slipped into my own version of the Dark Ages and wasn’t sure I’d ever find my way out.

The emotional breakdown came later, when the same ill feeling crept into other efforts at other pieces. From there it was a short leap to doubting the validity of my future plans, cursing my lack of focus/motivation/organizational skills, the malicious cycle of getting upset over getting upset, dubbing myself a failure, writhing on the floor of my boyfriend’s car.

They say if life gives you lemons, make lemonade. But what if you don’t like lemonade? What if you’re allergic? What if you can only drink small doses and life just so happens to give you a crapload of  lemons?

Maybe I need to wait for my lemons to ripen a bit (though patience has never been my strong suit). Maybe I should just throw some away, try some apples instead.

Maybe I shouldn’t be mixing school (or indeed, my future livelihood) with “therapy.” Maybe I shouldn’t put so much pressure on myself to be productive (and gag the inner voice that keeps telling me it’s the whole reason I’m here!). Maybe I need to stop defining productivity in terms of numbers of pages – and numbers of pages that directly apply to my now very scattered and incoherent thesis project idea (see previous parenthetical).

Maybe I should forget about maybes and what ifs, have a glass of wine and go to bed.

If it was that easy – if anything was – this blog would be pretty lame.
Posted by Lauren Kay Johnson at 9:27 PM 3 comments:

Last week I took a overview class on the publishing industry, hoping to learn more about my future job prospects. I learned (among some other legitimately cool/enlightening things): 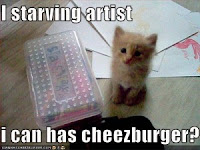 Amidst the discussions of business planning and finances, which seemed to strategically coincide with my monthly bill-paying routine, and the arrival of a health insurance statement, and the planning (ie. budgeting) for an upcoming trip, my head was spinning with numbers. A head full of numbers is always an unsettling feeling for someone who’s used to working with words, but on this particular occasion, it really hit me: Being an adult sucks.

When it comes down to it, I’ve never been an adult before. Sure, I grew up and went to war, but I did it in a bubble. A military base is essentially a small city, full of like-minded people telling you what to do, where to go, what to say, and how to dress. I was part of a well-oiled machine which, in exchange for my blood, sweat and tears, would provide me with everything to meet my basic needs. Right out of college I had zero debt, a steady paycheck, a housing allowance, healthcare benefits, free moving services, a gym membership, a work wardrobe, access to religious advisors/career advisors/education advisors, and all-expense-paid trips to lovely vacation destinations like Afghanistan.

Military life certainly has its cons. In typical fashion, these are the things I noticed most while serving. There were midnight recalls; contingency responses; high-stress, high-profile assignments; working long hours, holidays and weekends that made it difficult to find time to utilize many of the available services. Next to trendy, chic civilian women, I felt frumpy in my camouflage and boots – a uniform that essentially declared me “Property of the U.S. Air Force.” And of course there’s the whole Afghanistan thing . . .

But I didn’t realize until now how, in many ways, my life was so comfortable. Sheltered. Meandering somewhere between childhood and independence.

People say war makes men out of boys. If to be a man is to carry a country’s expectations on your shoulders, to live on the edge of death, to witness the cruelty mankind is capable of committing, and to question everything in which you believe, then yes, this statement is true.

Thus, the military both inhibits the transition to adulthood, and forces it.

And what comes after? What happens to these “men” when the bubble pops?

I left the military still fresh from my baptism-by-war. I can’t say the rug was ripped out from under me, because I stepped off the rug. But that’s how it felt. My only foundation was military-made, and was shaken by my deployed experience. Afterward, I had nowhere left to stand.

Unemployment is a common post-military landing place. In 2011, the Iraq and Afghanistan veteran population had a 12.1% unemployment rate, compared with 8.9% among their civilian counterparts. After eight months as part of that statistic, I chose grad school.

The lack of structure in an academic environment both excited and overwhelmed me. So did my expanding wardrobe. (I take, on average, 40 minutes and five outfit changes to get dressed in the morning.)

Most things about civilian life intrigue me, but my shrinking bank account is just plain scary. I’m not used to seeing all those red numbers, with so few black ones to counteract. Apparently I’m not alone. A recent article on marketwatch.com reported that “veterans ages 29 or younger have average monthly expenses that exceed their net income by $880 as well as average credit card debt of $7,234.” YIKES!!

Granted, financial woes are not just a veteran problem. These are tough times for many. However, I’m sure a lot of of these veterans are, like me, struggling to reinvent ourselves outside the military bubble. When you take the cog out of the machine, the machine still runs. But the cog is useless.

We’ve outgrown the military, but in our circuitous route to adulthood, we failed to keep pace with our civilian peers.

I’ve never made a budget because I’ve never had to. Just another lesson I’m learning the hard way out here in the real world.

I gave up a comfortable life in exchange for uncertainty. I didn’t realize how difficult, how complicated, how uncomfortable the transition would be. But for me it’s worth it, because I seek other comforts: expression, creativity, peace of mind, fulfillment, a cute wardrobe. A life that is mine.

And a winning lotto ticket.