I should be polishing the essay I turn in to my workshop class tomorrow, or starting the research paper due next month, or chipping away at that looming thesis project. But sometimes there’s something that needs to be written before anything else can be. Today, that something revolves around Monday’s shooting at the Washington, DC Navy Yard.

It’s been a violent week. Last weekend, three separate shootings rocked my home city of Boston. The Navy Yard incident, though farther from home, hit me hardest. Not because of the scale—though how can you not balk at the gruesome facts: at least 12 killed and eight injured in the “single worst loss of life in the District” since a Boeing 737 crashed into the Potomac River in 1982, killing 78 people.

No, the Navy Yard shooting hit me hardest because the shooter was a veteran.

That makes it personal. That adds Aaron Alexis to a list of high-profile poster boys who represent what the public knows to be a veteran. He’s in the company of Army Staff Sergeant Robert Bales, who recently pleaded guilty to killing 16 Afghan villagers in March 2012; Iraq veteran Benjamin Colton Barnes, who shot and killed a park ranger at Mt. Rainier National Park almost exactly a year ago; and Army veteran Wade Michael Page, who fatally shot six people at a Sikh temple in Wisconsin in August 2012.

Of course, any shooting death is tragic. But a perpetrator with military connections makes it doubly tragic for the veteran community. Cue the ripple effects of reinforced stereotypes.

Additionally, this situation is hard for me because I know that as a veteran, Alexis had access to a support network.

The military and VA certainly don’t lack for negative press, especially in light of shocking statistics like in 2012, the number of military suicides was higher than the number of American soldiers killed in Afghanistan. Still, the military community comes with an inherent support network that includes not only official mental healthcare channels, but also chaplains, family support centers, supervisors who are trained and charged with their soldiers’ well-being, and, of course, peers who have “been there, done that.” So many resources—if Alexis had reached out to one, could this tragedy have been prevented?

And is it really that simple? Of course not.

Seeking help requires a degree of self-awareness and an emotional vulnerability that goes against military culture and training.

The military thrives on an ethos of hyper-masculinity. In war, you can’t afford to be emotional. I am by nature one of the most emotional people I know (I still have to fast-forward through Mufasa’s death scene), but in Afghanistan, out of necessity (and somewhat unwittingly), I built barriers around my emotions. It was a defense mechanism that enabled me to do my job—one which keeps war-fighters focused and alive.

But emotional dullness doesn’t translate back to “real life.” I recognized that on some level—that’s what spurred me through the doors of my base’s Mental Health Clinic when everything in me wanted to turn around. My military mentality told me I was weak. A failure.

In hindsight, I realize that incredibly difficult, controversial decision was one of the most important choices I’ve ever made. But can a veteran be faulted for not making it? Is there an element of institutional failure as well?

Right now, the details of Alexis’ military career are sketchy. There's no information on whether he deployed. Reports say that during his service as a Navy reservist he had a “pattern of misconduct” but ultimately received an honorable discharge. The New York Times also reports that Alexis “exhibited signs of mental illness” for many years.

Surely, there were people who interacted with Alexis and noticed red flags. Surely some such interactions occurred during his time in the service.

In response to the shocking suicide rates, the military has become, in theory, hyper-aware of mental health issues. One of my annual Air Force training requirements was a lengthy Suicide Prevention presentation that was so cheesy and mind-numbing that we all joked it made us want to commit suicide. Each unit took “training days” to discuss our individual and group concerns. We filled out questionnaires about our mental health. We were given flyers with a hotline number. 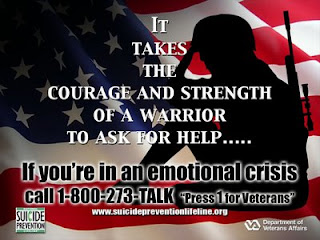 Mental health was a hot topic for discussion, but too easily clashed with the aforementioned culture in practice. A change in culture starts at the top, and takes more than handouts and PowerPoint. And ultimately, each person is responsible for his or her own sphere of influence. How many paths did Alexis cross where he could have been turned? How many people were too busy, too distracted, too disinterested, too self-absorbed, too scared, too lenient to act?

As a 2nd Lieutenant, my second year in the Air Force, I got a call in the middle of the night that one of my Airmen had been put on suicide watch. The Airman was someone I directly supervised, someone I interacted with on a daily basis, someone I was responsible for. I had failed. It can be so easy—and so terribly costly—to fail.

I could never justify or rationalize the killing of innocent people. I’m not making excuses for Alexis’ actions. I imagine there are a million factors that combine to make a person commit a violent act. And I imagine that no matter how strict our gun laws or how strong a person’s support network, if someone is dead-set on committing violence, he or she will find a way to do so.

I can only hope that in the wake of this tragedy, we can all take stock of our potential for failure—as individuals, as institutions, as a society—and be hyper-aware in practice of prevention.
Posted by Lauren Kay Johnson at 2:59 PM 19 comments: